Place:VariousDate:2003ConceptThe invocation of the myth of Oedipus was a result of a problematic produced upon issues like, human place, identity, passion; also the function of truth and self consciousness in the reach of freedom and redemption… Having to define the atmosphere in which being projected out of time and space the story of Oedipus appear to my judgment as the most appropriate to compress the issues I was dealing with.
Brief: Oedipus comes to Athens seeking for refuge from the king Theseus. He asks for permission to burry his derelict body in the land of Attica and promises welfare for the city in exchange. He has lost his throne, he is exiled from his homeland and he is looked upon as a contaminated person because [...]

Oedipus comes to Athens seeking for refuge from the king Theseus. He asks for permission to burry his derelict body in the land of Attica and promises welfare for the city in exchange. He has lost his throne, he is exiled from his homeland and he is looked upon as a contaminated person because of the crimes he did. First of all Oedipus is a man confronted with the truth. He learned who he really is, that’s why he is doomed in an eternal voyage, for he is exiled from every consolation on earth.

Oedipus is captured like Ulysses in a boat of fate that travels in independence from his personal universe. His house is a placeless place where a traveling identity is always returning to its homeland and his vehicle is nothing but an endlessly moving scenery with scattered stones. Instead of a blind man we see a man with a pure sight who is asking for too much. He is asking to learn the whole truth.

My proposal is composed by two main spatial elements. It’s a device that can be experienced as a space and as an outdoor sculpture at the same time.
The first part of the composition is named “the house of Oedipus” and it is revealed as a curved space hiding its existence behind a metal wall. It is formed in two levels: the visitor enters the interior of the construction in a way that he will discover an installation named the “the chariot of Oedipus”. It is a metal platform 8 meters long standing on wheels fixed in the platform in a way that indicates the potential of movement. On the platform stands the poetical allegory of Oedipus, a human figure of 2.20 meters, in a “landscape” of disperse stones. The “enclosed” platform leaves enough space for the beholder to walk around the installation.
A metal staircase, which passes over the platform of Oedipus, is leading to the upper level, which gives the impression of the deck of a ship. The deck is intersected by an aerial passage, which provides access from the “house of Oedipus” to the second element of the composition named “The eye of Oedipus”. At the one end the bridge terminates at a simple metal frame a metaphorical conventional window towards reality. At the other end of the aerial passage the visitor is standing on the dark interior of the steel tower in front of a circular opening, waiting for a magnifying lens (the eye of Oedipus) to make an instant pass. A procedure, which symbolizes the experience of reality, by a person who has discovered himself before turning his eyes to the universe. The lens is moving automatically back and forth on rails, between the steel tower and a steel mesh panel 8 meters high, an abstract representation of a face. 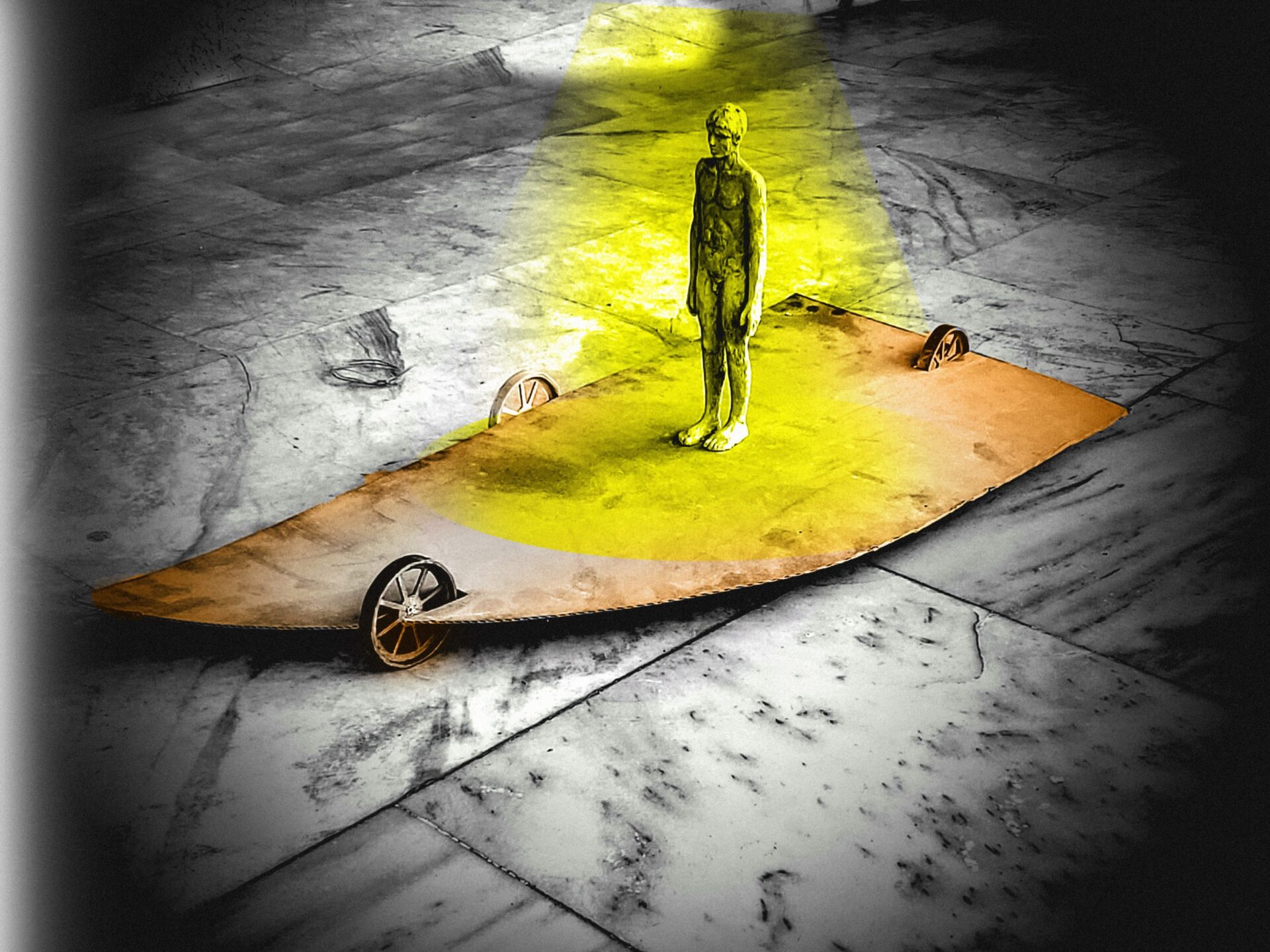 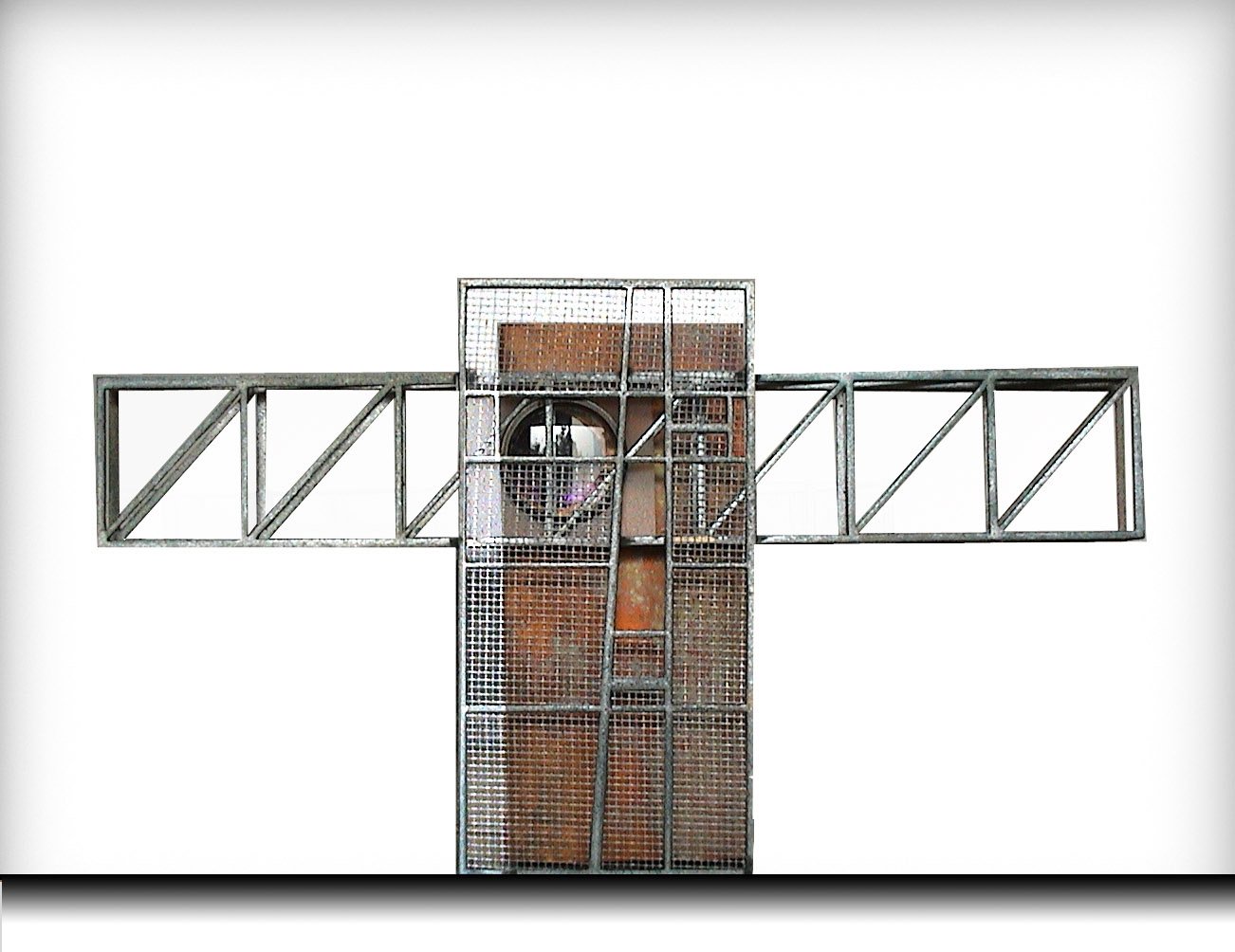 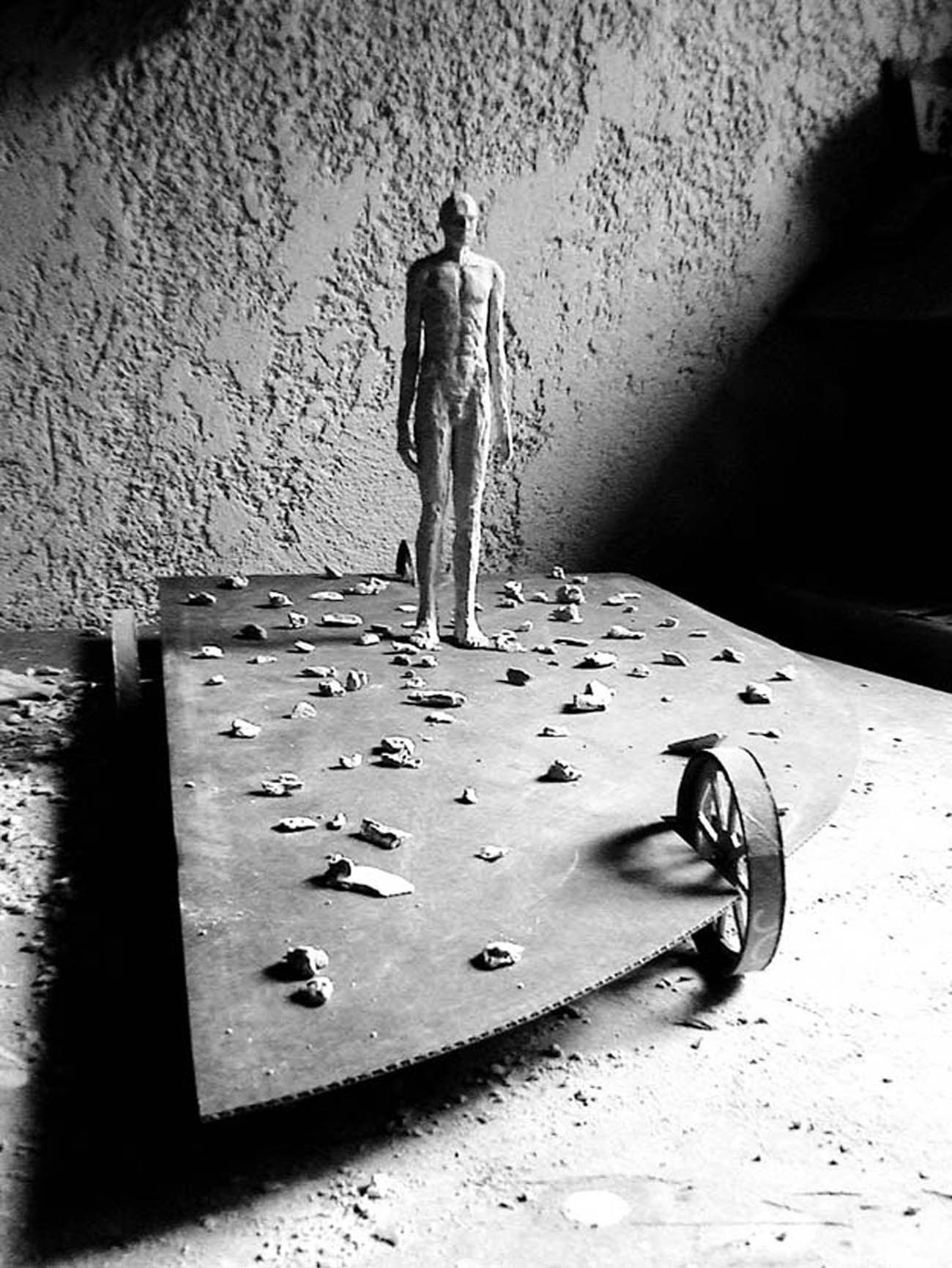 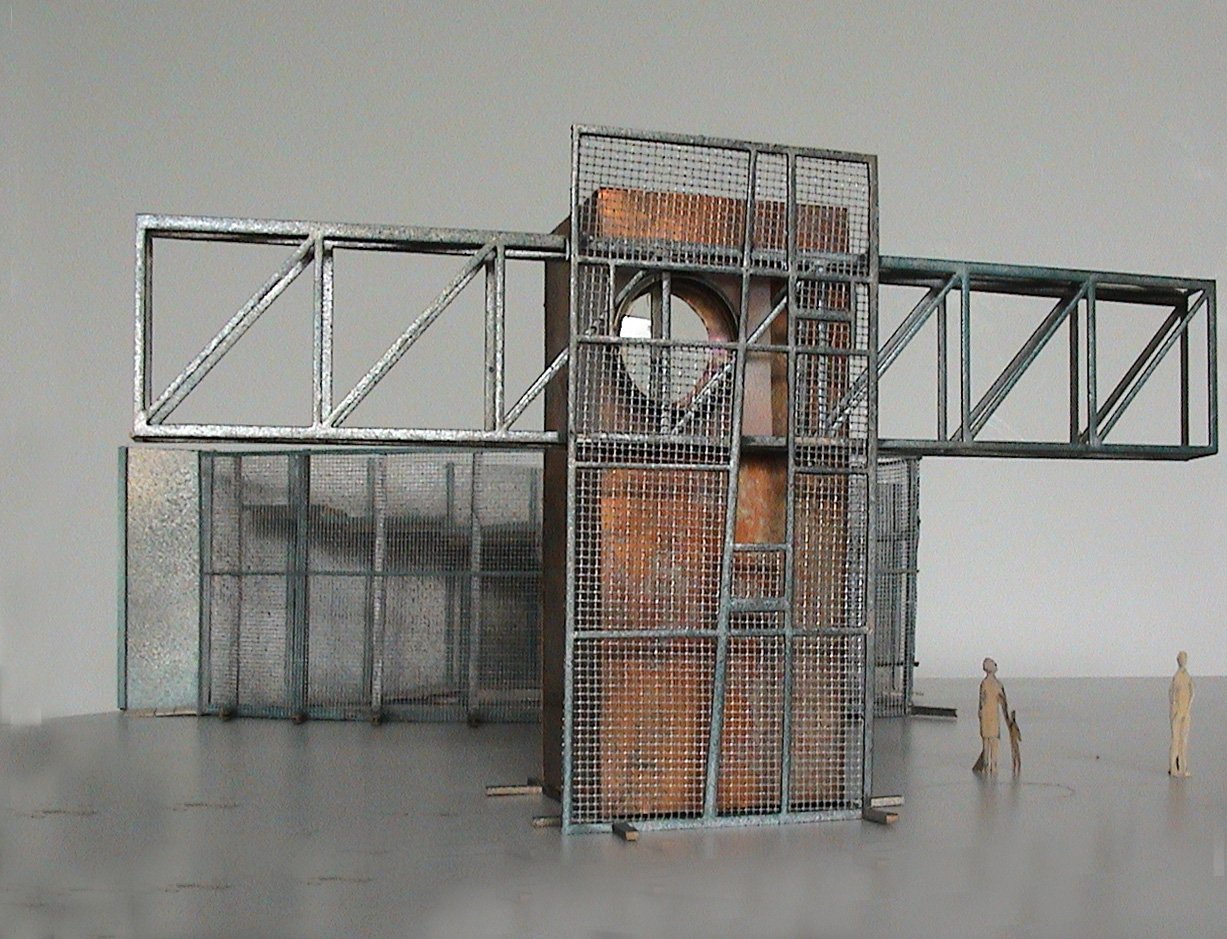 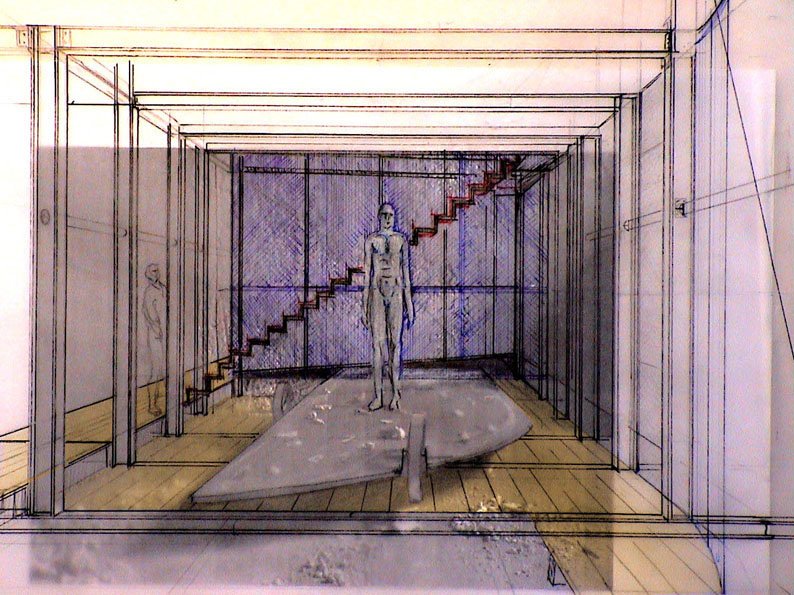 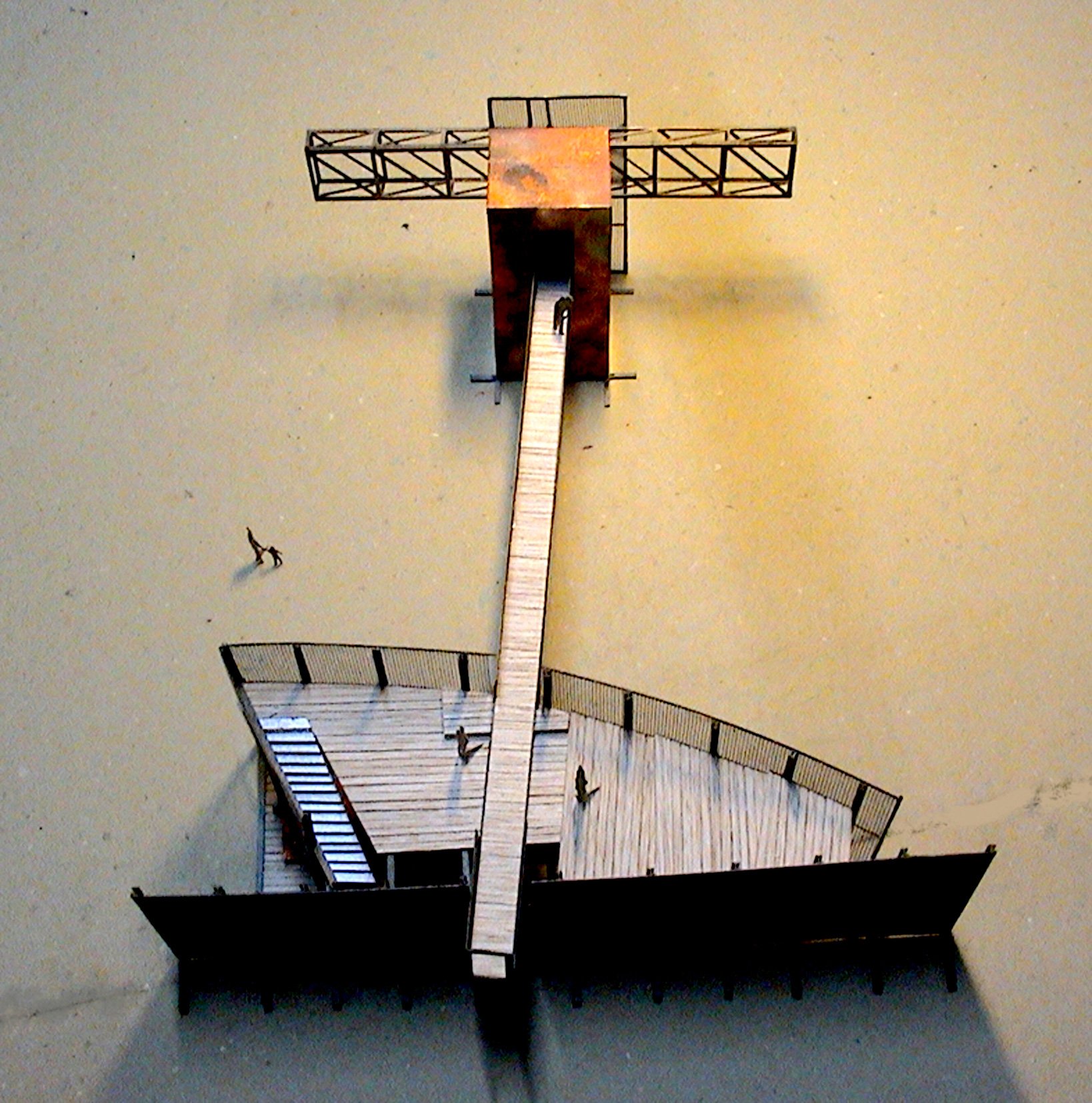 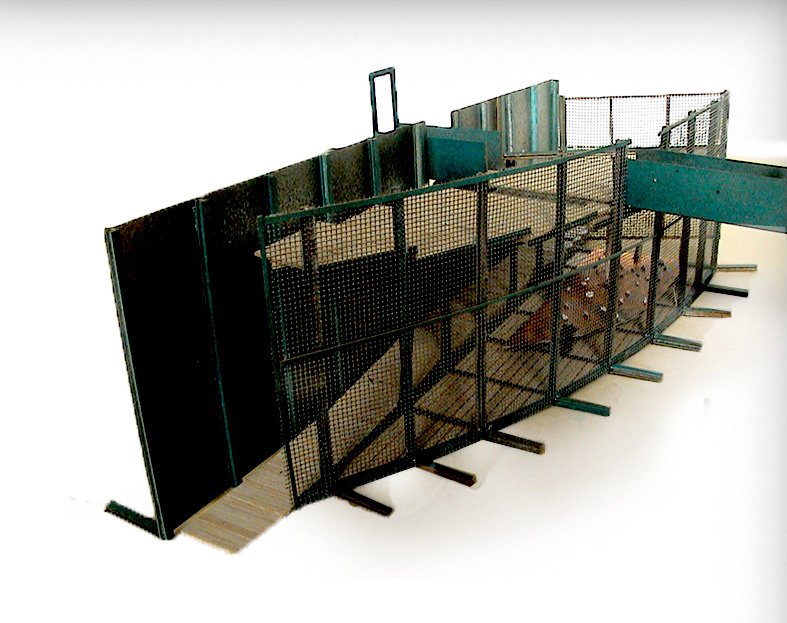 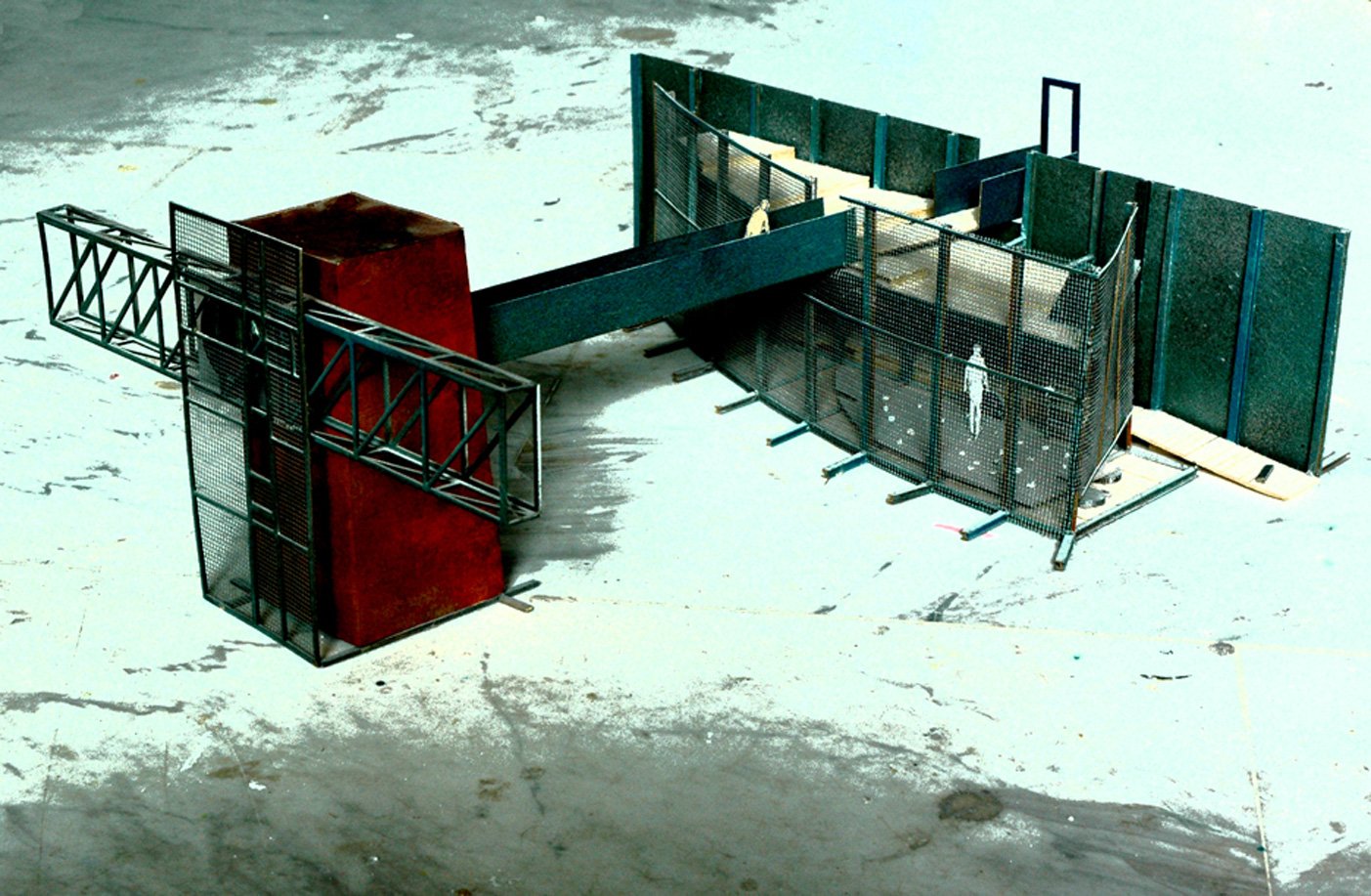 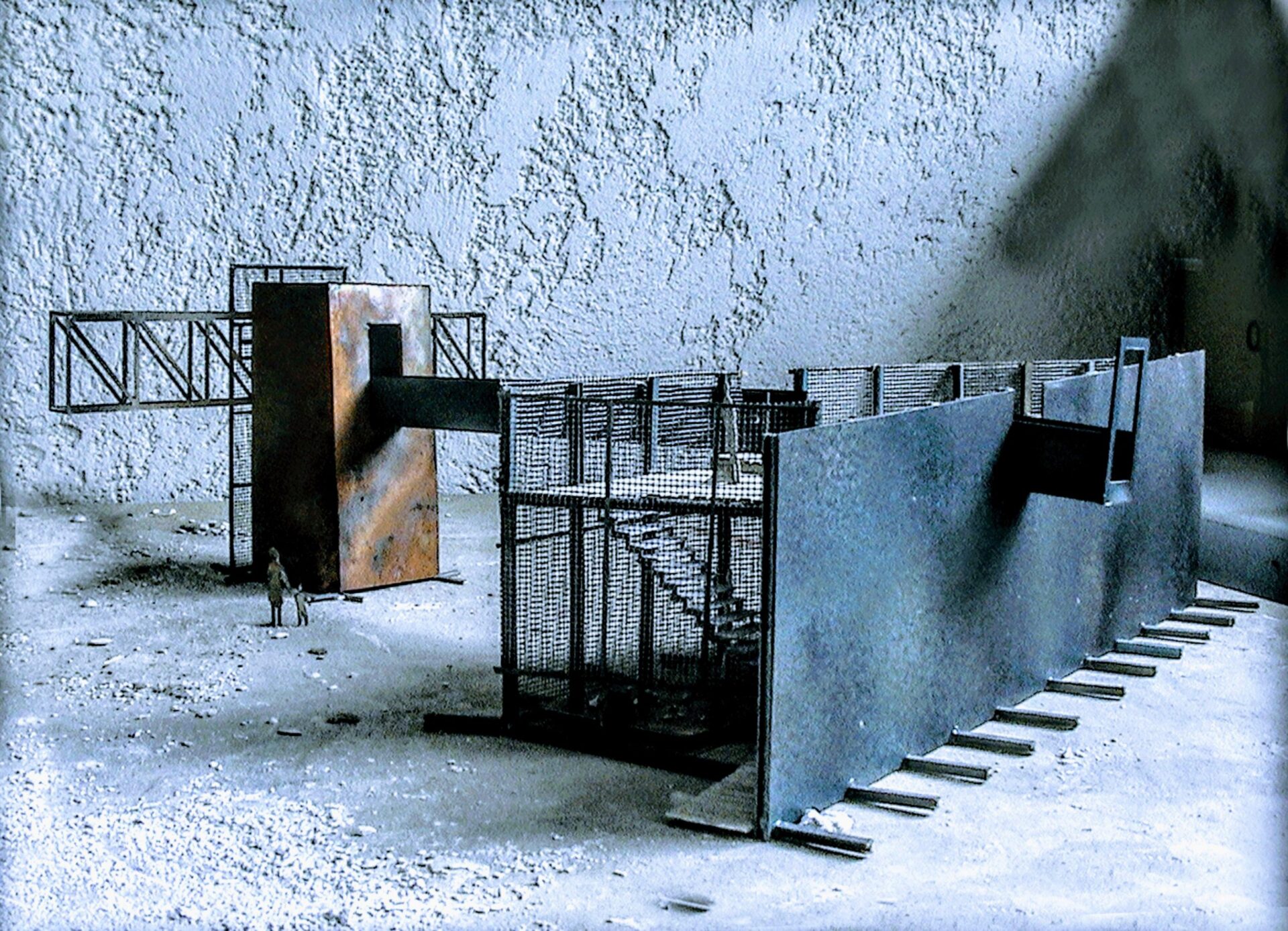 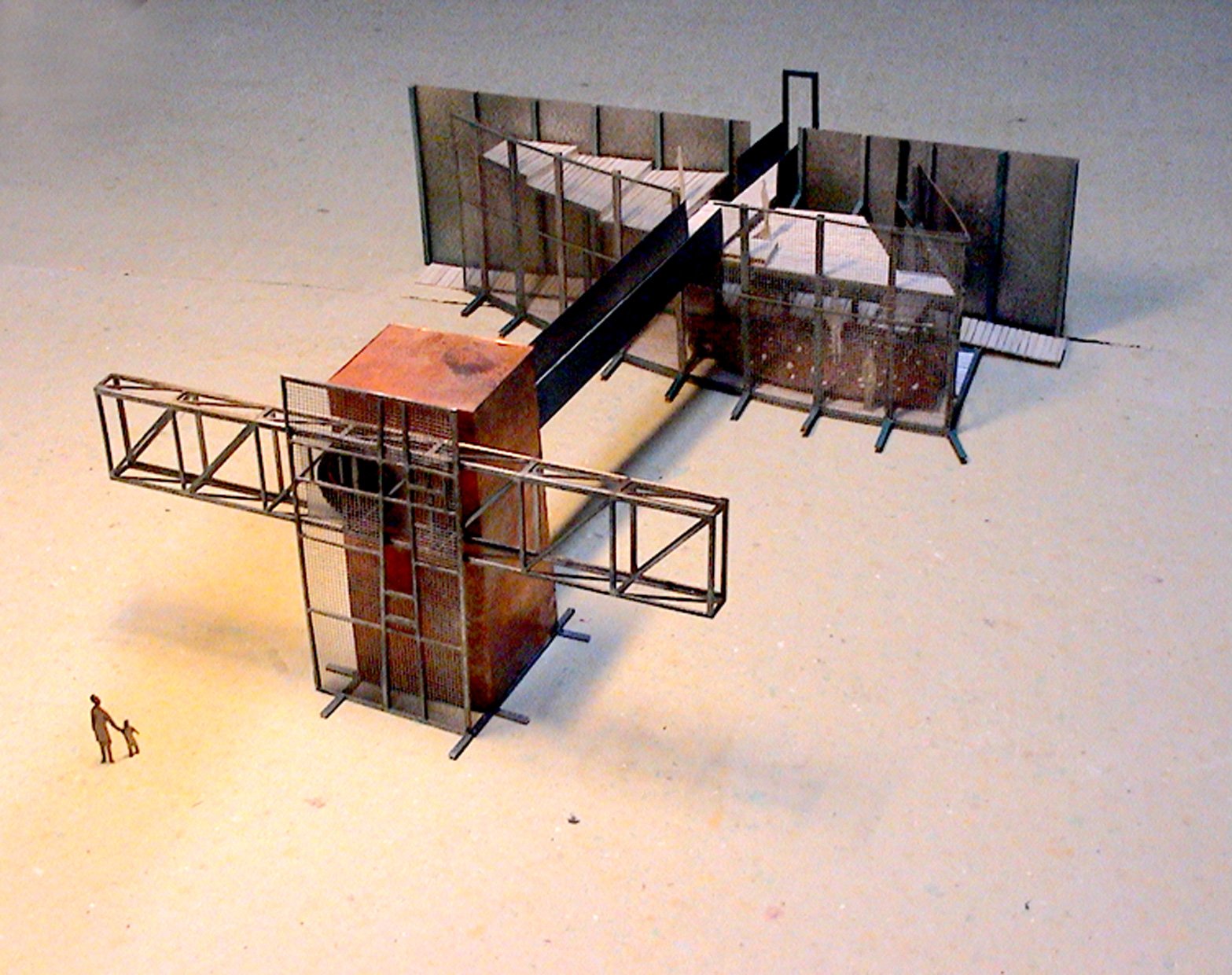 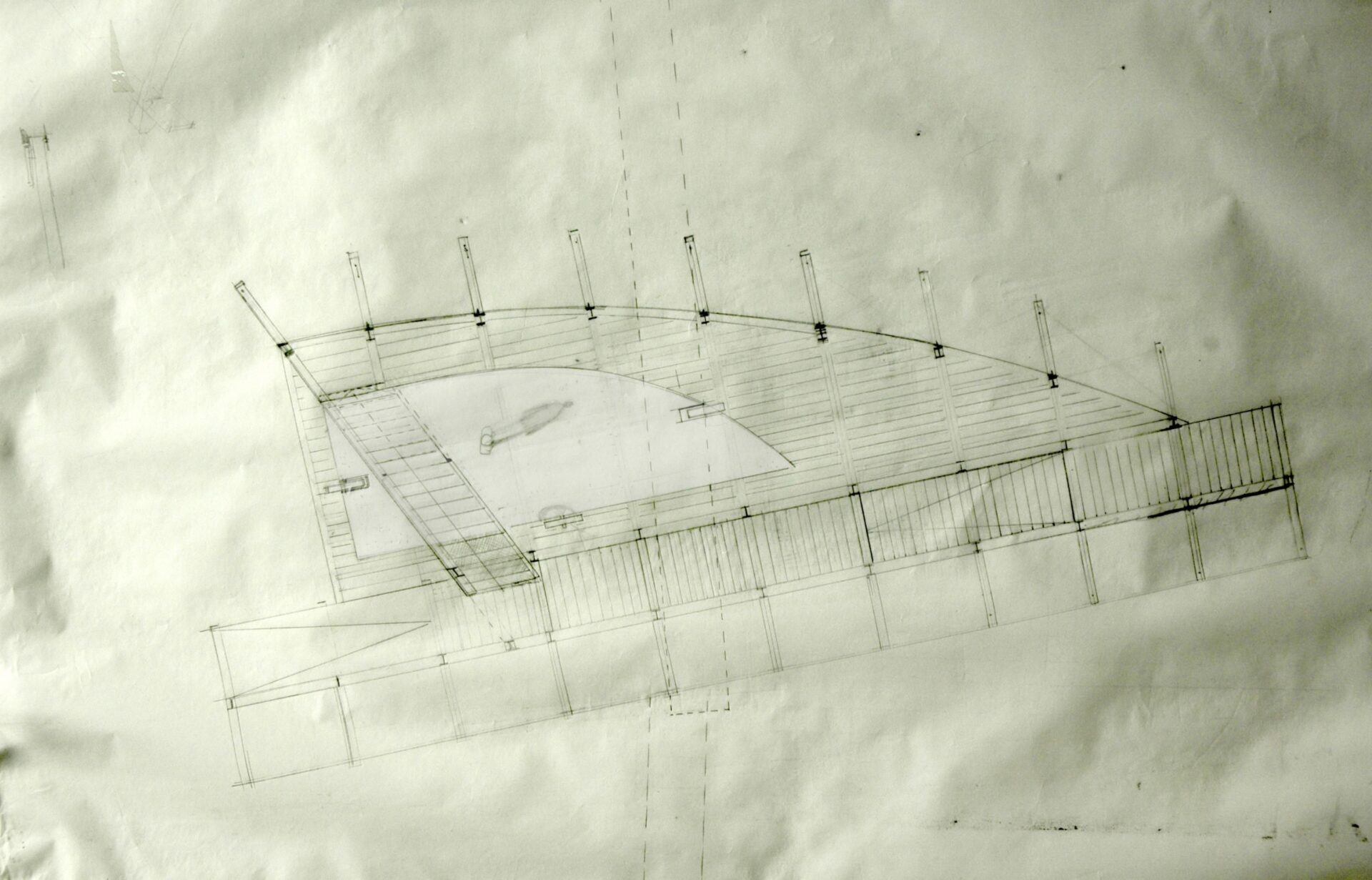 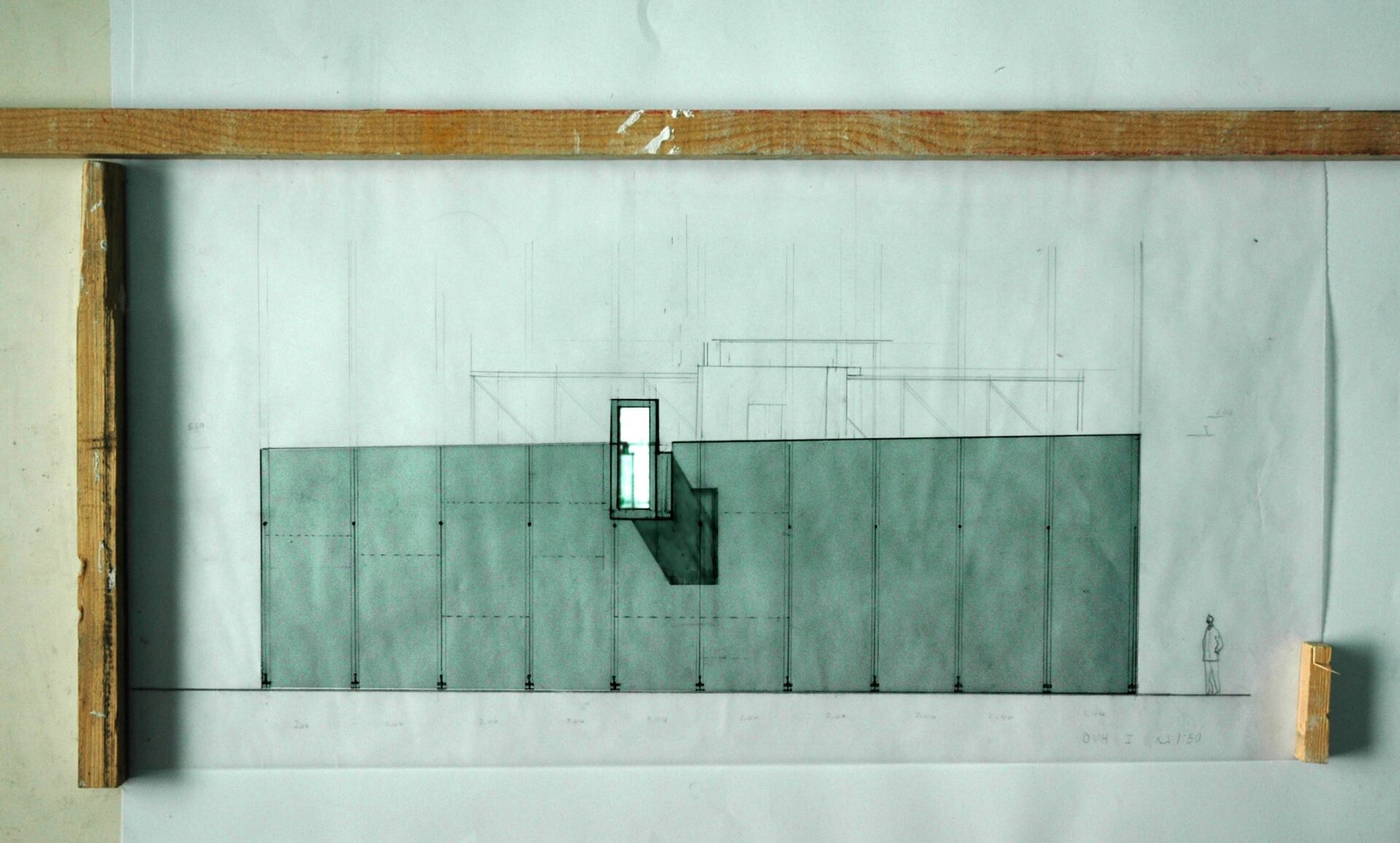 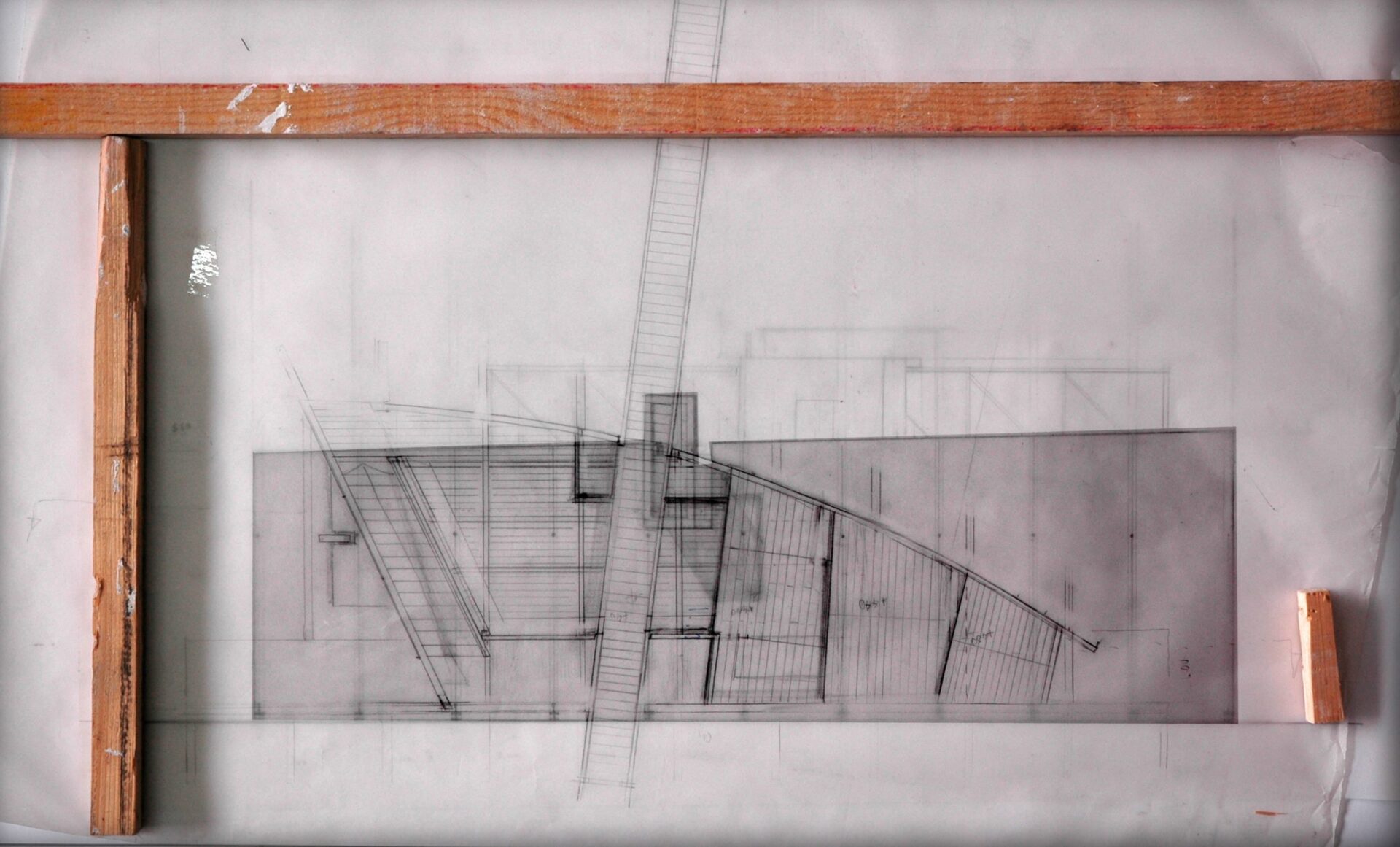 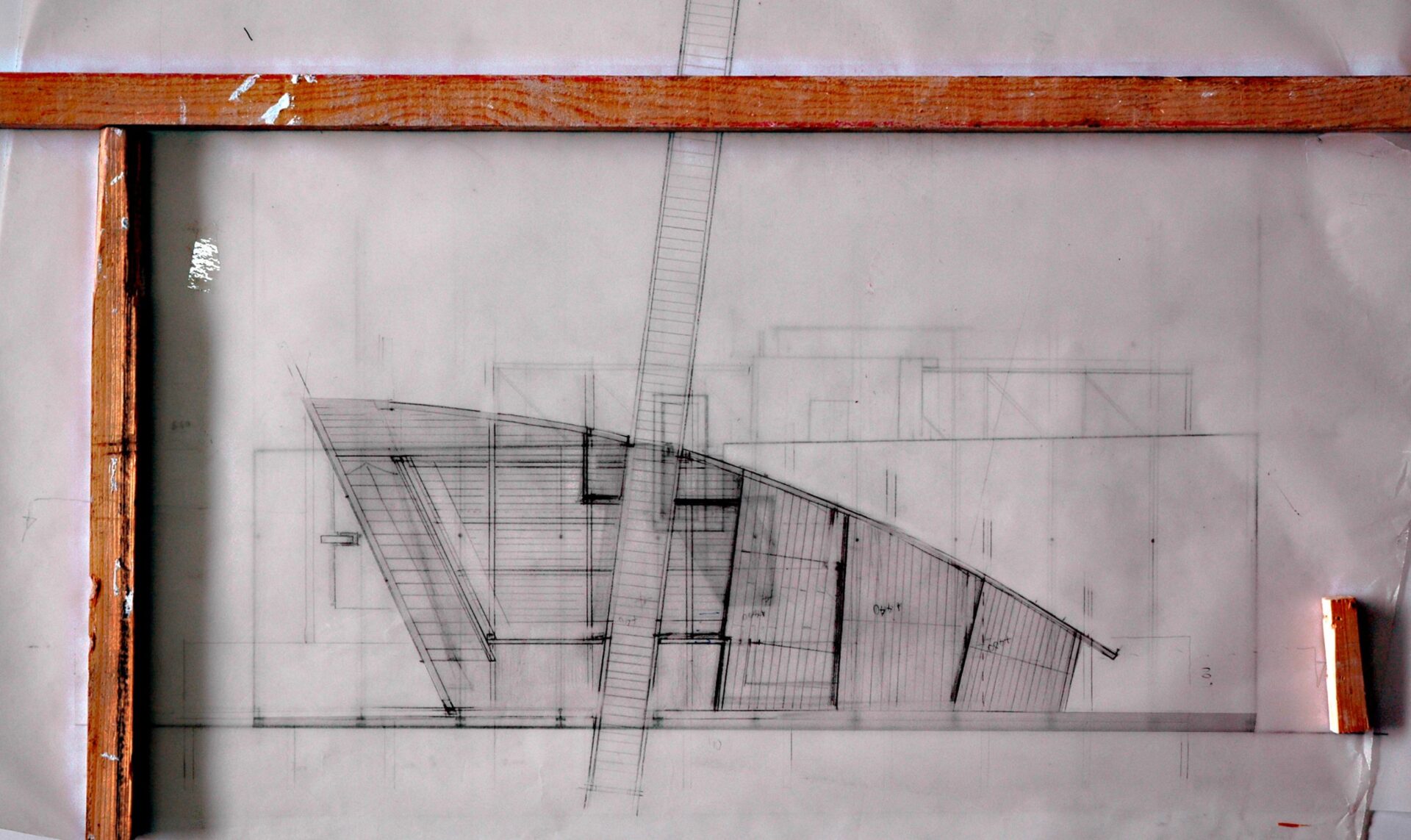 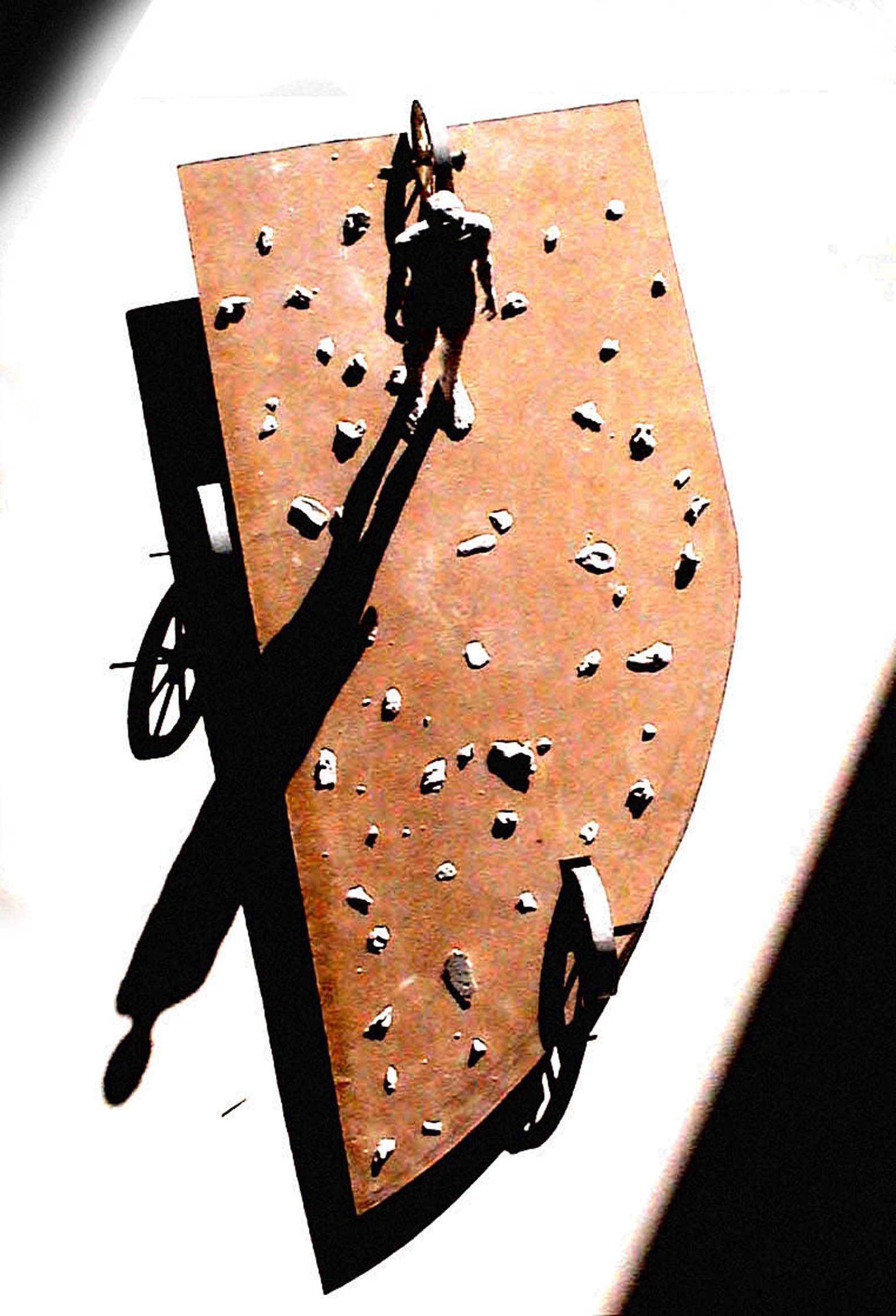 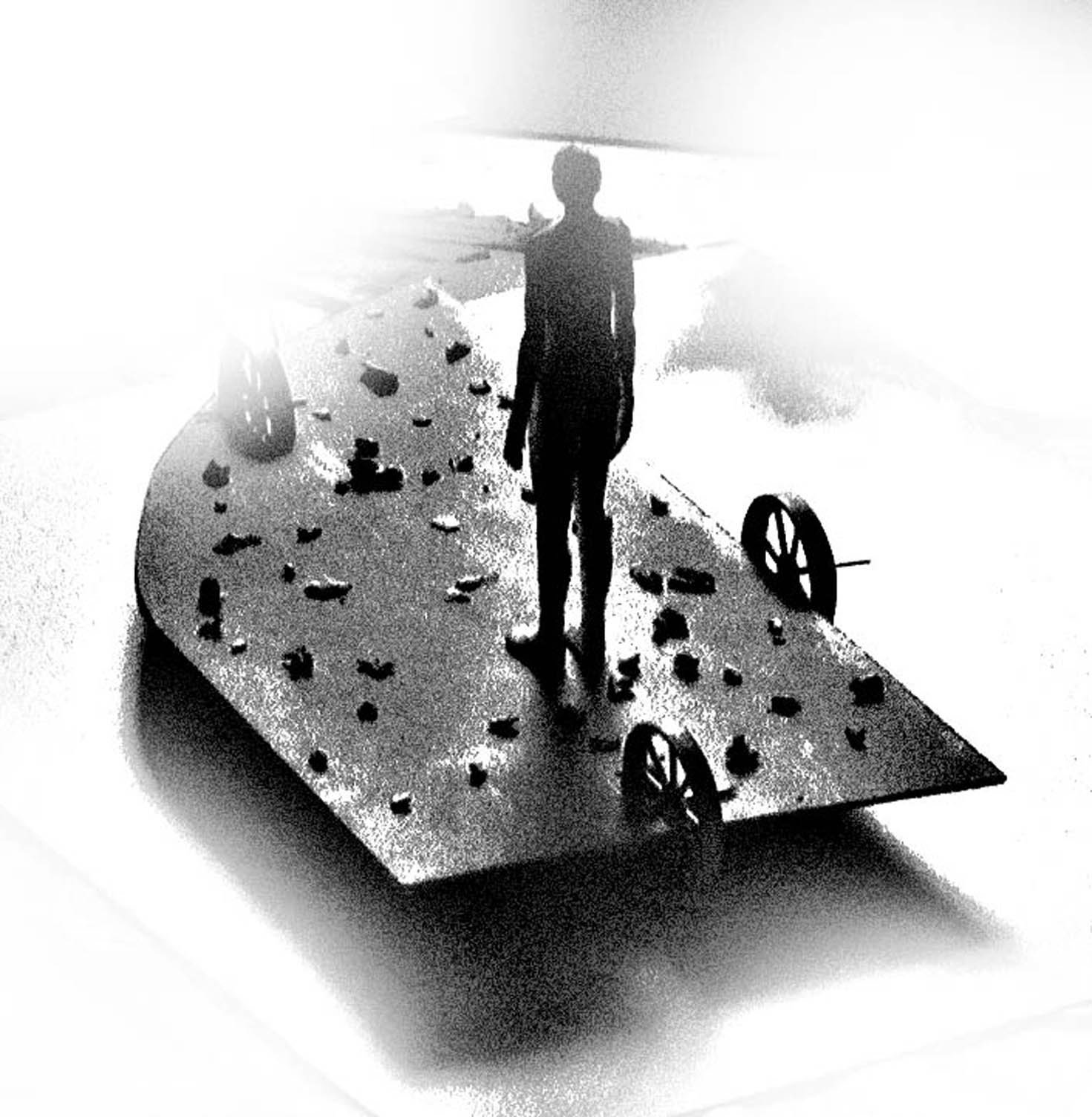 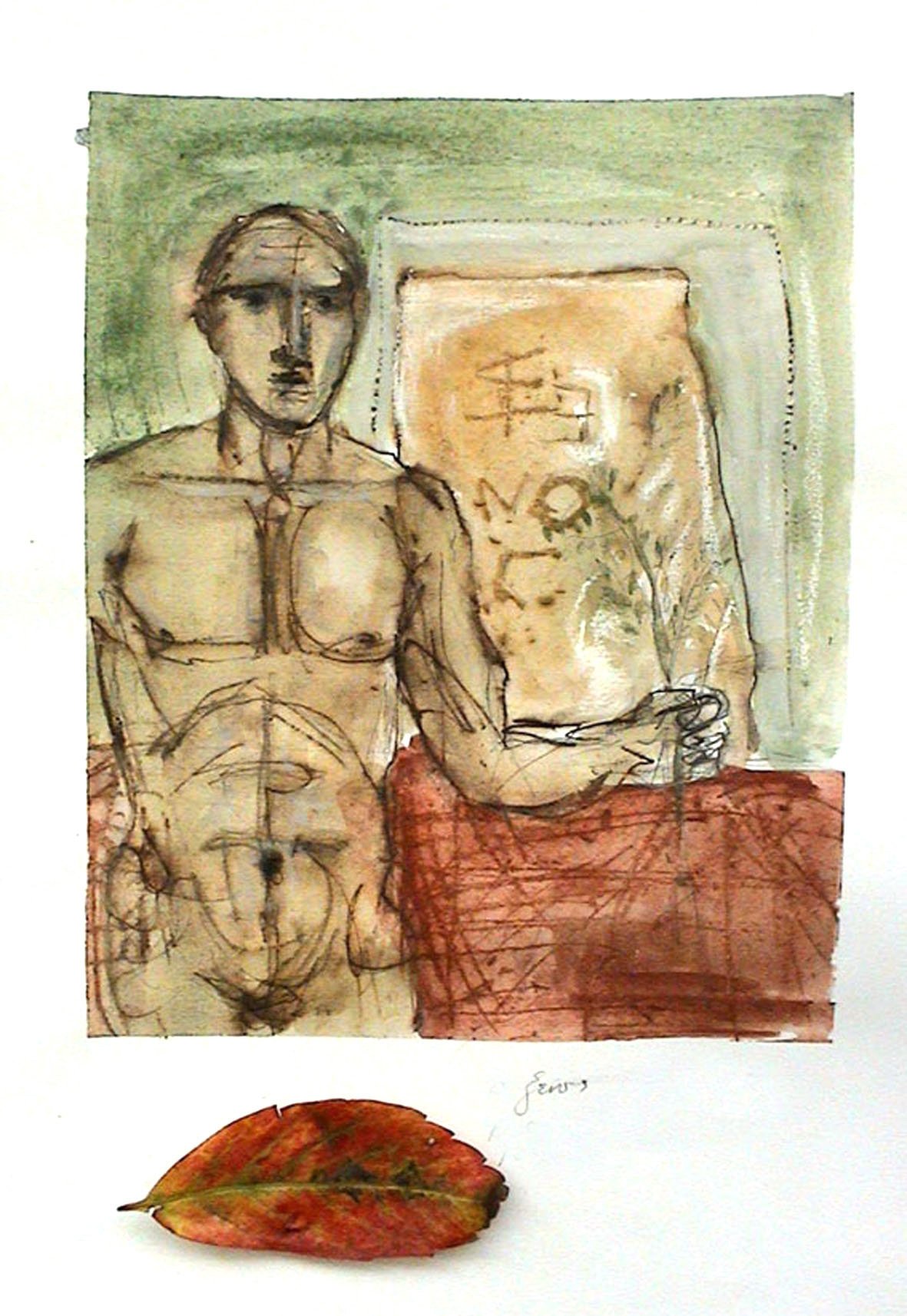 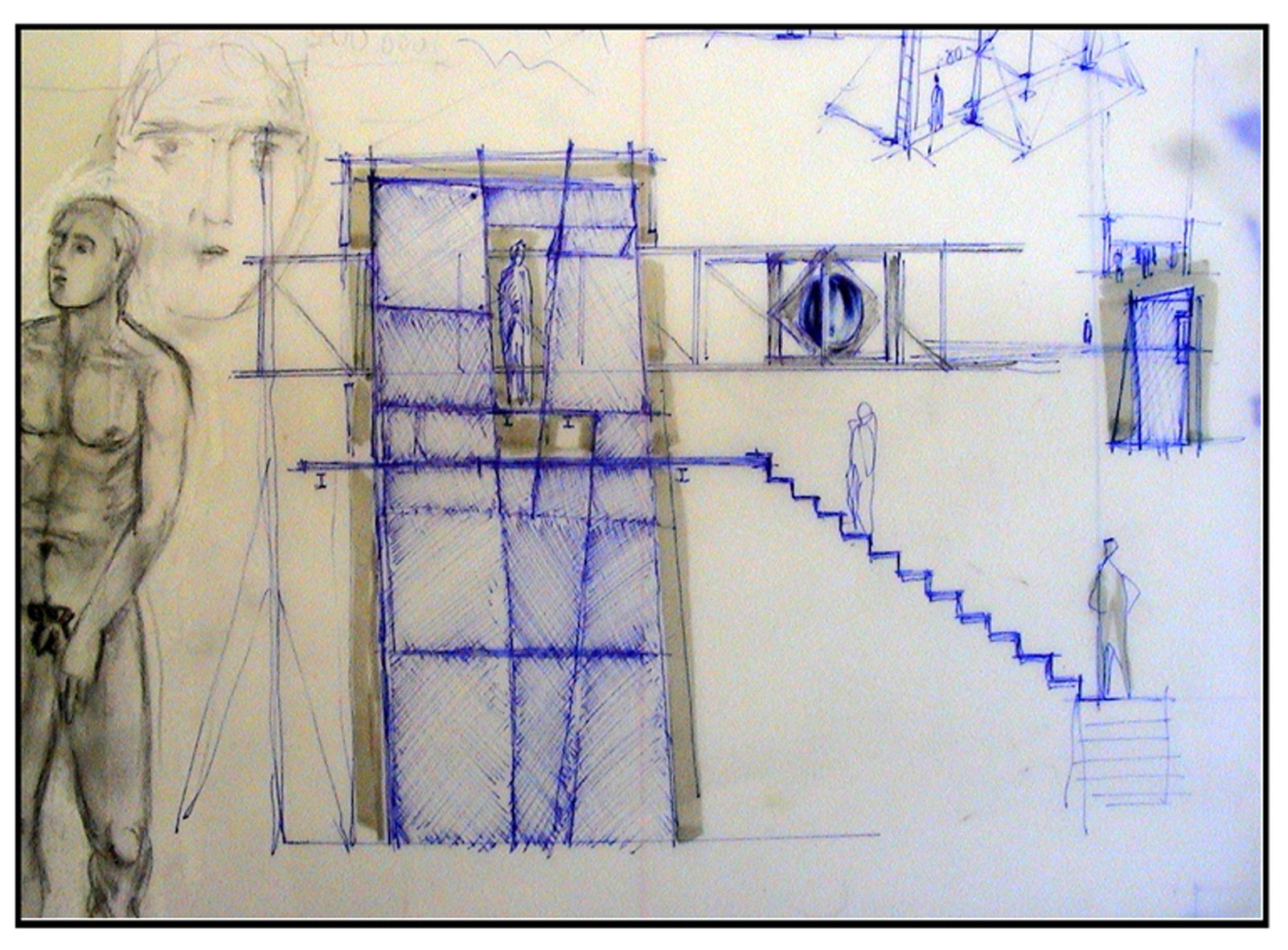 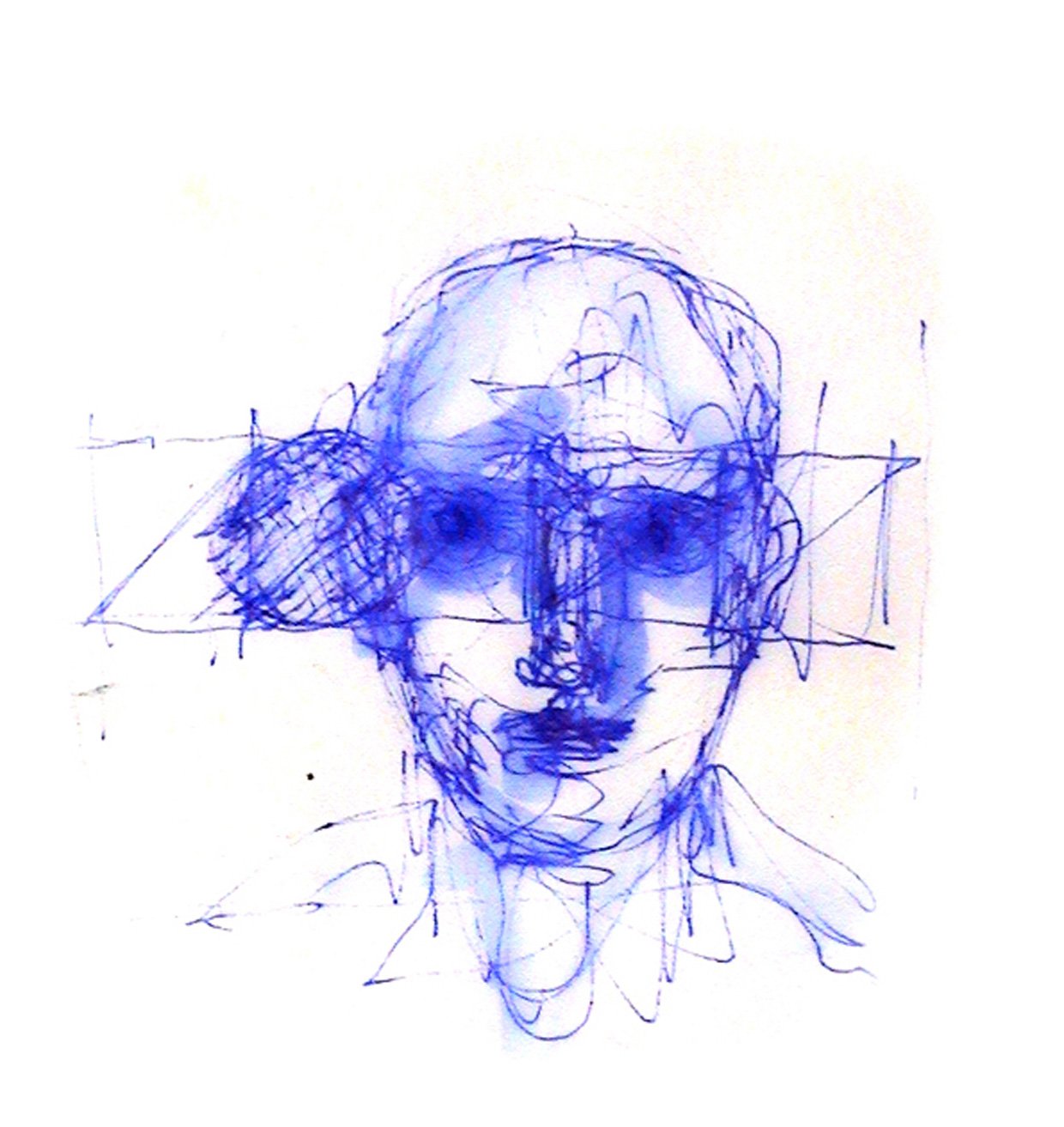 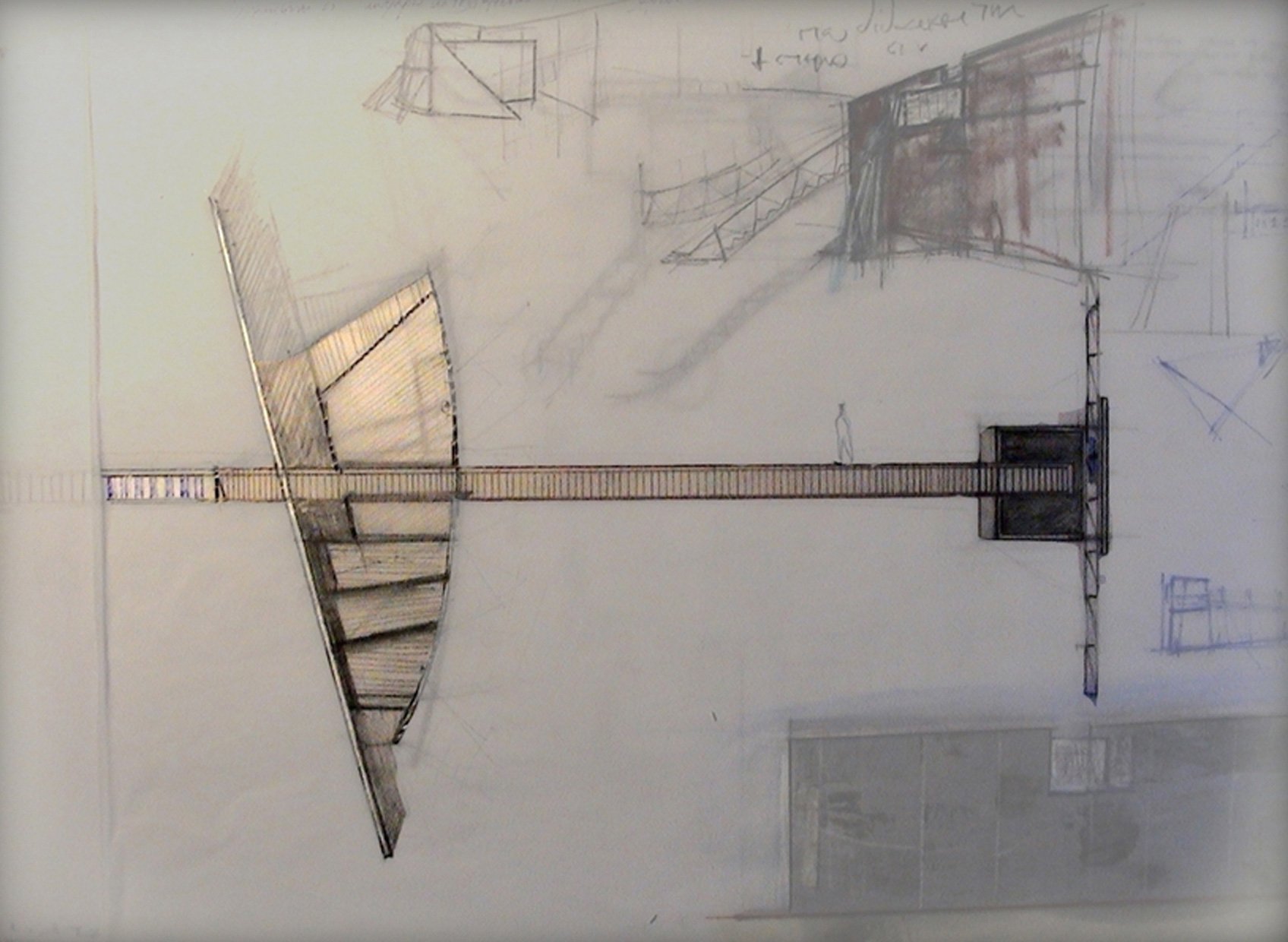 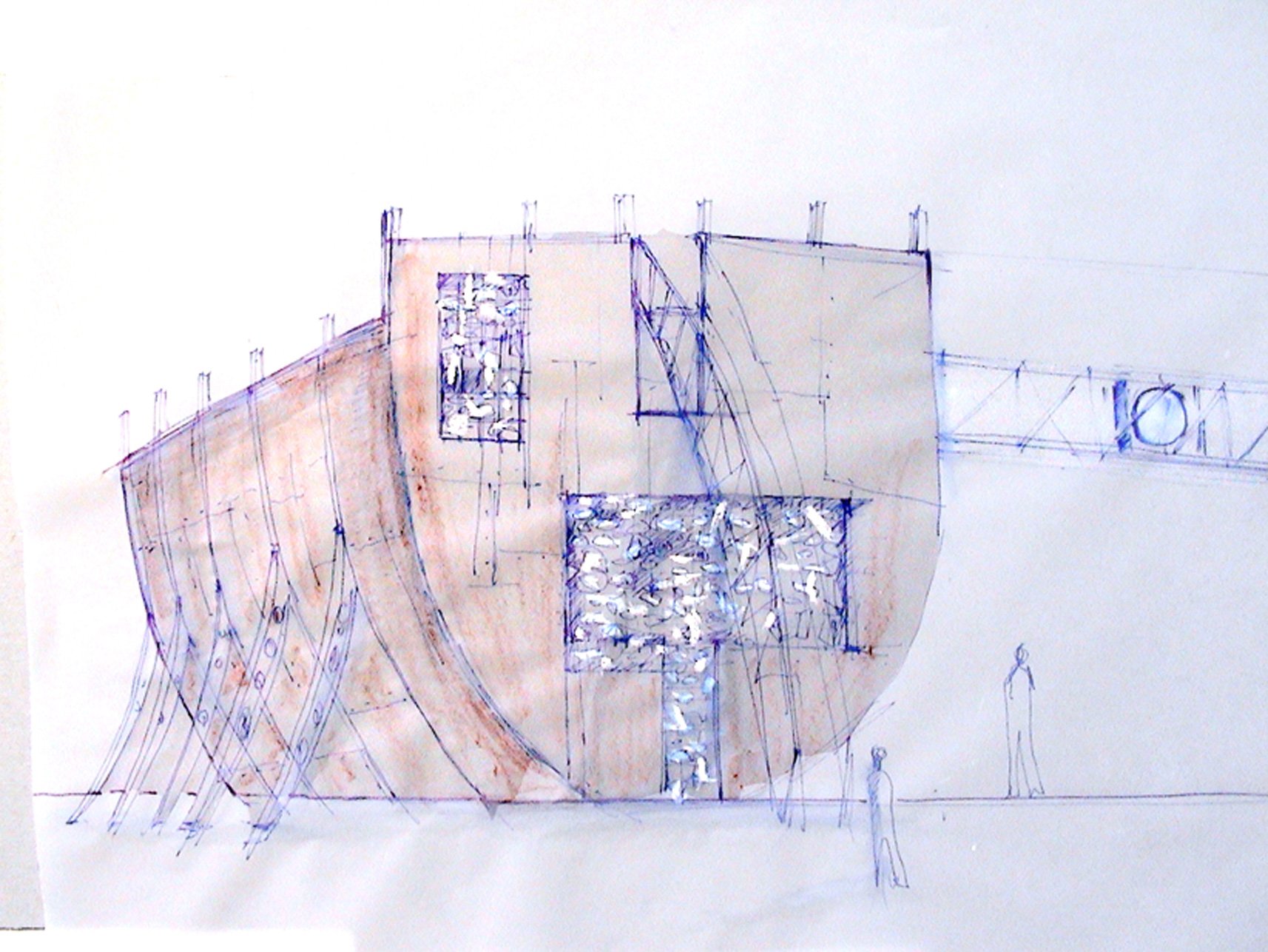 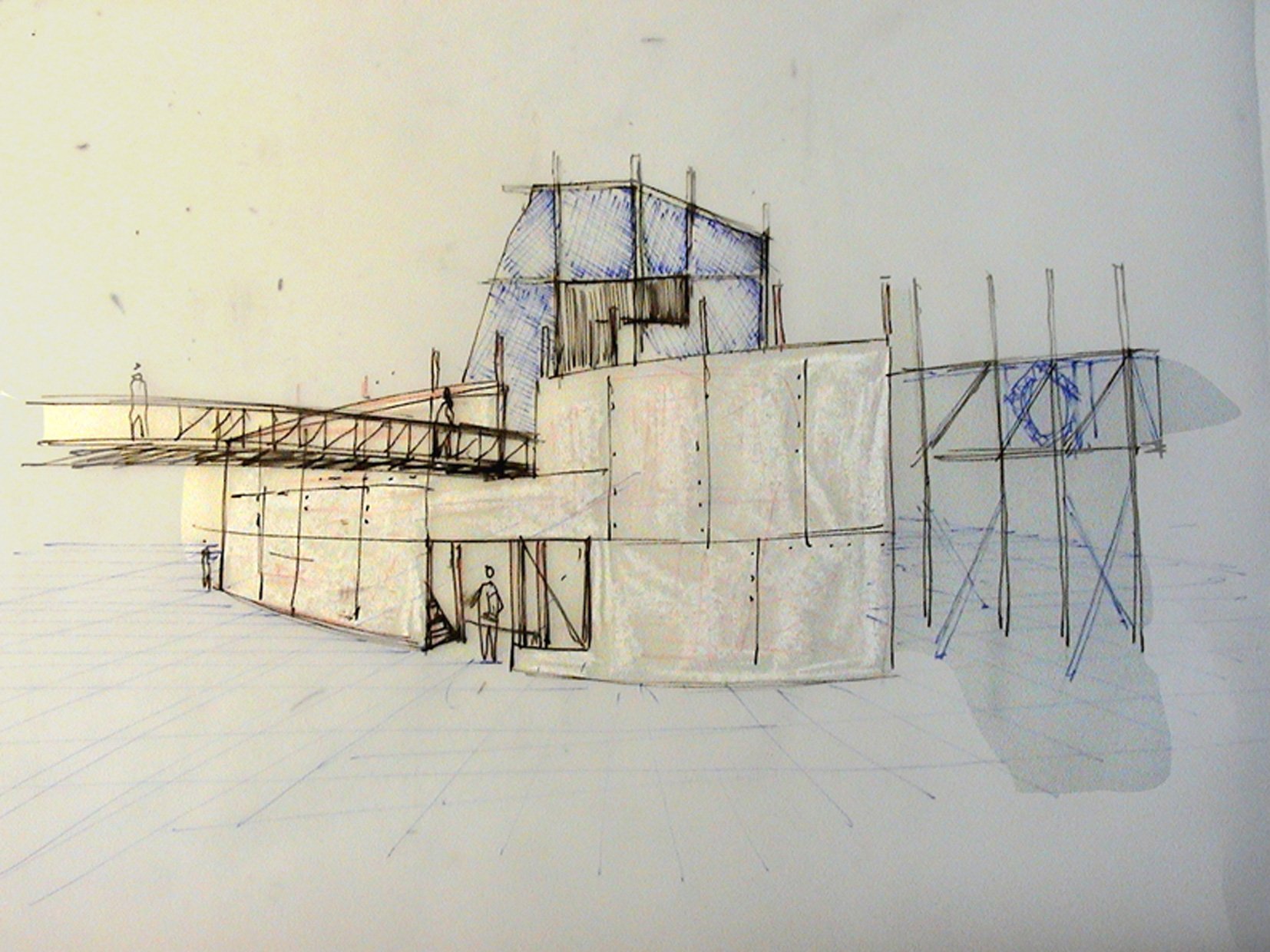 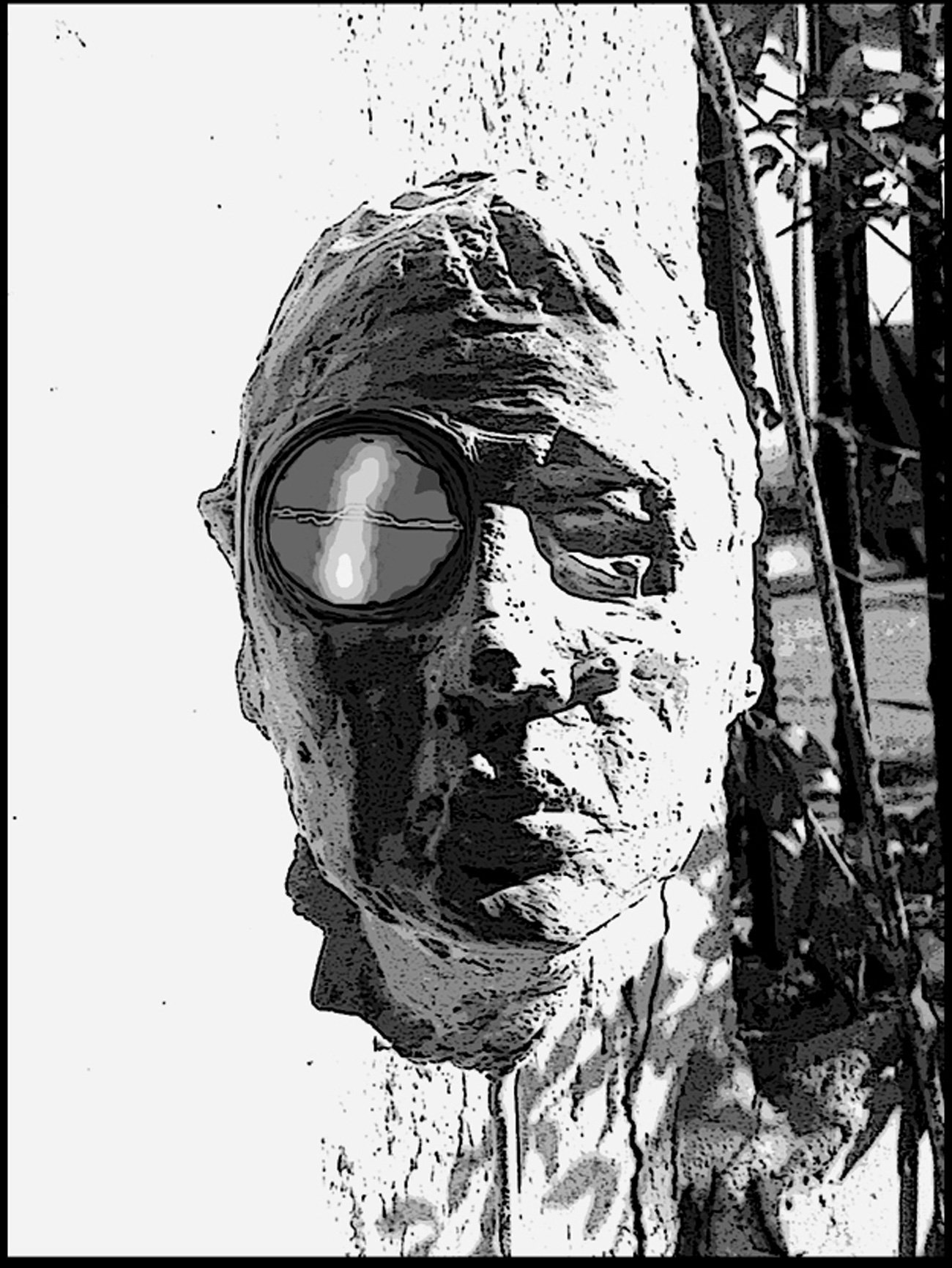 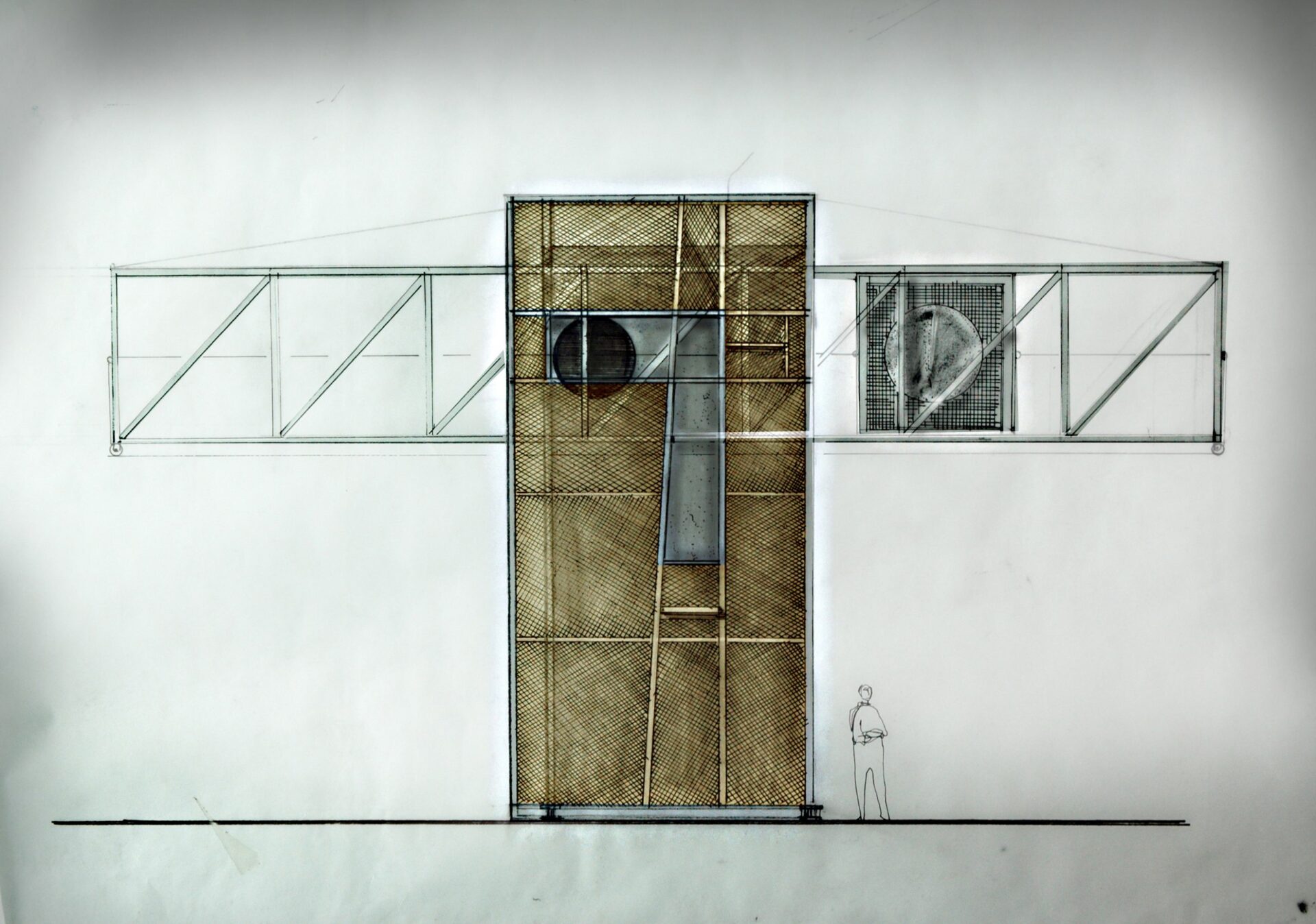